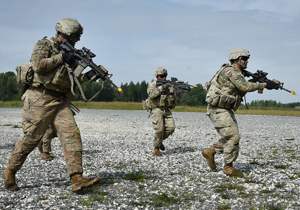 As noted in a previous post about this matter, the Judicial Panel on Multidistrict Litigation (JPML) met on March 28 to consider consolidation of the nationwide claims in the 3M Combat Arms™ Earplugs (CAEv2) lawsuits. The Panel has announced the cases will be sent to the Northern District of Florida before Judge M. Casey Rodgers.

To recap: The product, distributed to military personnel between 2003 and 2015, was the only dual-sided earplugs in use by the military at the time. One side was said to allow low-level sounds (such as commands) to be heard and the other to offer more complete hearing protection. However, veterans have filed lawsuits against the 3M Company claiming the earplugs were defective and led to their noise-induced hearing loss and/or tinnitus (ringing in the ears).

Most hearing loss cases typically involve older rail workers and others who have lost their hearing after years in loud work environments. However, the plaintiffs in the 3M lawsuits are younger adults with their whole lives ahead of them—young individuals in their early 30s, many of whom did multiple tours of duty in the Mideast or were exposed in stateside training exercises.

They now suffer from permanent hearing loss and tinnitus, facing difficulties with employment due to their injuries and many with marriages and other family relationships that are suffering.

The stories that these individuals tell can be heart-breaking, such as the father who couldn’t hear his child crying in the other room or the isolation another felt at social gatherings because his hearing is compromised. In the words of Gori Julian attorney D. Todd Matthews, who has been involved in the earplug litigation since the beginning, “You don’t talk bad about your mom, you don’t kick your dog and you don’t hurt military women and men.”

As for the monetary damages to be sought, there is the challenge of how attorneys will arrive at the correct figure, given that the plaintiffs are so much younger than those in traditional hearing loss cases. It remains to be seen what the plaintiffs will ask for.

The Legal Challenges Ahead

So, what lies ahead in terms of potential defenses that must be overcome? And what are some of the legal challenges in this mass tort litigation?

The primary defense being talked about by legal experts is government contractor immunity, based on the three-prong test of Boyle v. United Technologies Corp., 1988). This would require 3M to demonstrate that its earplugs met all three parts of this intensely factual test, proving generally that: