Dan Myer To Be Honored at NJBiz’s ICON Awards Ceremony 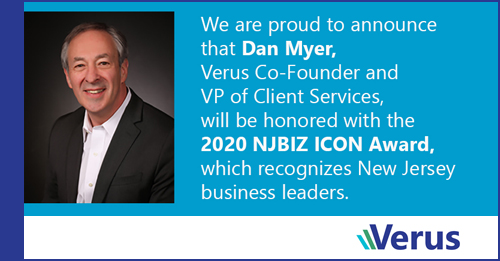 On August 18, Verus Co-Founder Dan Myers will be honored at NJBiz’s ICON Awards ceremony for his longstanding commitment to championing the needs of tradespeople and others who have become ill because of their exposure to asbestos.

Dan has devoted his career to asbestos litigation: he is widely credited with having helped design some of the first-ever mass tort asbestos settlements and in the process, has been involved in the settlement or administration of more than 2 million asbestos personal injury claims and in the disbursement of more than $6 billion in settlement funds and expenses on behalf of over 60 various asbestos defendants.  Today, Dan remains one of only 10 or 12 people that were actively involved in the asbestos litigation that peaked in the early 1980s that are still active in the space today.

Dan says he is still amazed at how much asbestos litigation unfolded over the course of time and the lessons he learned about what he calls the “granddaddy of torts.”  Decades later, he still has deep empathy for those hurt by their exposure to asbestos and their families: “These were just hardworking people trying to earn a living.”

Please join all of us at Verus in congratulating Dan!