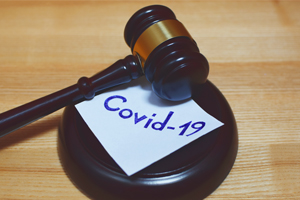 The novel coronavirus pandemic continues to impact courts across the country and force the postponements of several key jury trials:

The Missouri Supreme Court has cancelled all in-person arguments for the month of April; nevertheless, the Missouri Eastern District Court of Appeals in St. Louis has set a date of 4/24 for Johnson and Johnson’s appeal of the record-setting $4.69 billion verdict against the company in July 2018.

On April 1, the Pennsylvania Supreme Court extended an order shutting down most court operations until the end of the month. This includes cancelling the Supreme Court’s scheduled argument session for April as well as closing both county-level trial courts and the three statewide appellate courts to the public, with certain exceptions for essential court functions. In addition to those essential functions that had been excluded from that earlier order, the PA Supreme Court justices did state that they believed certain non-essential matters could begin proceeding using “advanced communication technology consistent with constitutional limitations.”

The second case that had been scheduled for trial out of the thousands of cases brought by New York Attorney General Letitia James and Nassau and Suffolk Counties against certain drug makers, distributors and pharmacies for their roles in the opioid crisis has been postponed indefinitely.  The trial had been scheduled to start on March 20; trial judge NY Supreme Court Justice Jerry Garguilo has scheduled a conference on April 14.

Two talc trials against Johnson and Johnson pending in Los Angeles Superior Court have been postponed until June.

Brower v. Johnson and Johnson, a case against the baby powder manufacturer by a plaintiff alleging her ovarian cancer was the result of exposure to the company’s baby powder product currently pending in Fulton County has been postponed.

Cadigan v. Johnson and Johnson was originally scheduled to start trial on May 4 but has also been postponed.