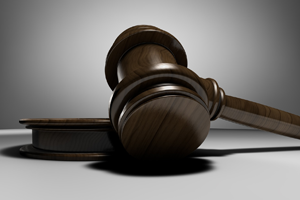 In a landmark ruling Monday afternoon, Cleveland County District Judge Thad Balkman found that corporate giant Johnson & Johnson and Janssen, its pharmaceuticals unit, had played a part in causing Oklahoma’s opioid crisis by using false and misleading marketing practices that exaggerated the benefits of their opioid painkillers Duragesic, a fentanyl patch, and Nucynta while minimizing their risks of addiction, issuing a judgment in the amount of $572,102,028.  Oklahoma Attorney General Mike Hunter used Oklahoma’s public nuisance law to argue that J&J had created a crisis that presented an imminent danger to the people of the state. In his statement, Judge Balkman said “(The) defendants caused an opioid crisis that is evidenced by increased rates of addiction, overdose deaths and neonatal abstinence syndrome in Oklahoma.”

In the lawsuit, Oklahoma was seeking $17 billion to fund an “abatement plan” that would last 30 years and be designed to address the impacts of the ongoing opioid crisis; Judge Balkman acknowledged in his ruling that the $572 million would be sufficient to only fund the first year of an opioid recovery plan that experts had testified would take at least 20 years to be effective, indicating that “the state did not present sufficient evidence of the amount of time and costs necessary beyond year one to abate the opioid crisis.”

At a news conference following the verdict Attorney General Mike Hunter praised the ruling, stating “Judge Balkman has affirmed our position that Johnson & Johnson, motivated by greed and avarice, is responsible for the opioid epidemic in our state” noting the drugmaker “will finally be held accountable for the thousands of deaths and addiction caused by their activity” that “left broken homes, families and communities” in the state. “Our team proved the company used pseudoscience and misleading information to lead to the worst manmade public nuisance this country and this state has ever seen,” he said.

J&J issued a statement after Judge Balkman’s ruling saying it will appeal the findings, arguing “Janssen did not cause the opioid crisis in Oklahoma, and neither the facts nor the law support this outcome.”

The trial in this case, considered to be an important harbinger for the nearly 2000 cases consolidated in Ohio Federal Court, began on May 28 and lasted for seven weeks. During the trial, J&J argued that Oklahoma’s public nuisance law could not be applied to products or used to get a money judgment; the company also argued that since its market share was never more than 5% it could not be held liable for the entire cost of Oklahoma’s opioid crisis. Two other defendants settled before the Oklahoma trial began; Purdue Pharma settled in March for $270 million and Teva settled two days before the trial began for $85 million.