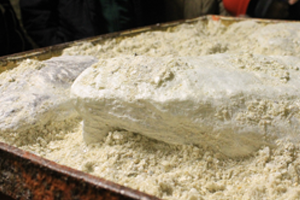 In a case currently being tried against personal products company American International Industries (AII) in New Jersey Superior Court, a microscopy expert took the stand to testify that the mines in Italy and Montana from which Clubman talcum powder is sourced contain asbestos fibers. Steven Compton, an electron microscopy expert, testified that eight out of the ten samples of talc from the Italian mines contained asbestos as did 6 out of the 53 samples from the Montana mine. All four samples taken from one of the plaintiffs’ bottles of Clubman talc and brush also contained asbestos.

Plaintiffs Margaret Lashley and Dwayne Johnson, a hairdresser and barbershop patron, respectively, are each suffering from mesothelioma that they claim was caused by long-term exposure to the asbestos in Clubman talcum powder. Ms. Lashley alleges she had been exposed to Clubman talc over several decades of applying it to her male customers; similarly, Mr. Johnson claims that he was exposed to the product during his own visits to barbershops.

Transmission electron microscopy employs the most sensitive type of microscope and is capable of magnifying objects by one million times. Compton testified that he looked at the shape and size of asbestos structures and then assessed their chemical composition and crystal structure to make sure they were asbestos and not another type of mineral.

In his testimony last Thursday, executive vice president for AII, Charlie Loveless, admitted that the company had never conducted its own testing until after it was sued by people alleging its talc products had caused their cancer, pointing instead to certificates of analysis for each shipment provided by its talc suppliers showing the suppliers’ testing results. The certificates indicated that there was no detectable amounts of asbestos in the shipments but after questioning, Mr. Loveless conceded that the company had never done its own internal testing to confirm those findings. He did testify that in 2017 AII had employed an outside testing lab, Western Analytics Laboratory, which did not find asbestos in the talc used in Clubman products; however, Mr. Loveless also admitted that both this testing and the use of any warnings applied to Clubman products were done after the company was sued. The company has replaced talc with cornstarch in its products.

AII has argued that its products are asbestos-free but it also contends that Ms. Lashley’s mesothelioma is not asbestos-related and that Mr. Johnson’s cancer is not actually mesothelioma.

This case is being tried before New Jersey Superior Court Judge Ana Viscomi, the same judge who presided over a recent talc trial involving Johnson & Johnson that resulted in a verdict of $750 million that was reduced to $186 million as a result of a state mandated cap on punitive damages.