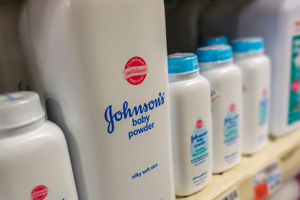 Talc manufacturer Johnson and Johnson recently found itself in courtrooms in both New Jersey and Missouri battling in cases filed by plaintiffs who claim that the company’s talc products contained asbestos and caused their ovarian cancers.

On April 24, the manufacturer appeared before the Missouri Court of Appeals for the Eastern District, arguing to overturn the June 2018 $4.69 billion verdict that found the company liable for the ovarian cancers suffered by 22 plaintiffs. At the conclusion of that six week trial, the jury awarded each plaintiff $25 million in compensatory damages and added $4.14 billion in punitive damages. The punitives were divided, assessing $3.15 billion against J&J and an additional $3.15 million against its subsidiary, J&J Consumer Inc.

Although the 90 minute argument covered a number of issues presented in the company’s brief, J&J focused on its contention that allowing such a high number of plaintiffs to be combined in a single trial was unfair to the company, pointing as proof to the fact that jury deliberated for only eight hours and awarded each plaintiff the same amount of $25 million regardless of individual circumstances.  The talc manufacturer also argued that it was inherently prejudicial for the jury to witness the plaintiffs or their surviving family members throughout the trial, a point the judge minimized, pointing out that that is the situation in every mass tort.

In response to the defendant’s arguments, plaintiffs’ counsel contended that although he acknowledged it would be a challenge for the jurors to differentiate between the circumstances of the individual plaintiffs, they had been “highly attentive”.  Counsel also had to answer the court’s questions surrounding the personal jurisdiction of the plaintiffs, acknowledging that 17 of them were from outside Missouri and that J&J is based in New Jersey. Plaintiffs’ counsel argued that 15 of those women claimed that they had used talc products manufactured for J&J’s subsidiary, J&J Consumer by Pharma Tech, a Missouri company.  In response, J&J argued that the plaintiffs would then only have jurisdiction to bring claims against the subsidiary and not the parent corporation. In response, plaintiff’s counsel pointed to the contracts between J&J Consumer and the contractor Pharma Tech.

The court is expected to issue a ruling at some point in the future.

On April 27, in other litigation involving Johnson & Johnson, a New Jersey federal court judge rejected most of the company’s efforts to exclude testimony from a number of experts that J&J’s baby powder products contained asbestos and could cause ovarian cancer. In her opinion, U.S. District Judge Freda L. Wolfson ruled that most of the experts relied upon by the plaintiffs’ met the Daubert standard for scientific support and their use of reliable methodology, paving the way for trials to be held in the MDL that currently has over 16,000 cases pending in New Jersey. The 141-page opinion followed an eight-day Daubert hearing held in July 2019 in which the court heard testimony from experts for J&J in biology, epidemiology and gynecology and experts in asbestos, epidemiology, toxicology and gynecology for the plaintiffs, reviewing their qualifications and the validity of their research.  Judge Wolfson found support for the plaintiffs’ claims that there was a statistical association between genital talc use and ovarian cancer. In response to J&J’s arguments, the judge noted that the company’s points were better suited for trial and went to the issue of the weight to be given to them and not to their reliability; she also noted that the plaintiffs would still need to meet their burden of proof on causation.  The judge narrowed the testimony to be offered by a number of the plaintiffs’ experts, including William Longo and Ghassan Saed and denied plaintiffs’ motions to bar three defense witnesses outright.

In response to the plaintiffs’ request in October to introduce more evidence after J&J’s recall of 33,000 bottles of baby powder when asbestos was found in some of them, Judge Wolfson opened the door to the possibility that requests for supplements to expert reports based on new studies would be considered.