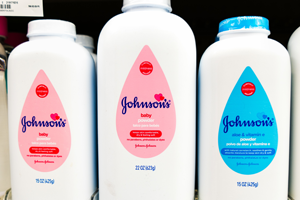 On February 6, Johnson & Johnson was ordered by a New Jersey jury to pay $750 MM in punitive damages to four plaintiffs suffering from mesothelioma as a result of their use of J&J’s asbestos-contaminated baby powder; the parties had previously been awarded $37.3 MM in compensatory damages after a two-month long trial before a separate jury in September, 2019.  The verdict followed several days of testimony in which plaintiffs alleged J&J knowingly sold asbestos-tainted baby powder and acted maliciously or in wanton and willful disregard; moreover, it was alleged that J&J had hidden evidence of the contamination with reckless indifference to the consequences.

J&J CEO Alex Gorsky was compelled to testify in the punitive damages phase of the trial about statements he made on national TV in 2018 contending the company’s baby powder was safe; he stated he had relied on internal experts in making those claims.

In his closing, plaintiffs’ counsel Chris Panatier had urged the jurors to award an amount of punitive damages that was not a number (the company) “would laugh at”.

The trial was held in J&J’s backyard in New Brunswick and jurors deliberated for about two hours before reaching their conclusion.  Citing New Jersey law, the presiding judge, Judge Ana C. Viscomi, reduced the verdict to $186.5 MM, or an amount approximately five times the compensatory damages that had been previously awarded.