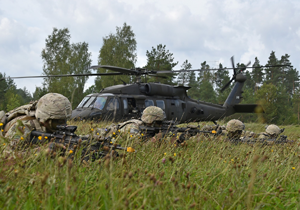 Princeton, NJ (April 29, 2019)  — When the Judicial Panel on Multidistrict Litigation (JPML) met on March 28, 2019, to consider consolidation of the claims in the 3M Combat Arms™ Earplugs (CAEv2) lawsuits, the prevailing thought among attorneys and other legal experts was that the JPML would establish a multidistrict litigation for the increasing number of cases nationwide against Minnesota-based 3M Company®.; however, the question of where the cases would be sent was an open question. The Panel recently announced the cases will be sent to the Northern District of Florida before Judge M. Casey Rodgers.

“It’s not surprising that the JPML consolidated these cases. It’s a complex case with thousands of potential claimants, exactly the situation where coordination makes sense,” said Deb Zonies, VP of Mass Tort Services and GC at Verus LLC, a litigation support service firm.

3M’s Combat Arms Earplugs (CAEv2) were issued to military service members from 2003 to 2015 for use both domestically and during deployment, including to combat zones in Iraq and Afghanistan. CAEv2 were the only dual-sided earplugs in use by the military, with one side said to allow low-level sounds such as commands to be heard and the other side intended to offer more complete hearing protection. To date, thousands of veterans have filed lawsuits against 3M claiming the earplugs were defective and led to their noise-induced hearing loss and/or tinnitus (ringing in the ears).

“Lawyers estimate that there may actually be hundreds of thousands of veterans with CAEv2 claims. The cases filed to date may just be the tip of a very large iceberg,” noted Zonies.

According to the Veterans Administration, hearing loss is one of the most prevalent disabilities among veterans. Further, allegations made in a qui tam suit brought in 2016 by a 3M competitor, Moldex, and that was joined by the U.S. government under the False Claims Act, are also likely to impact the latest lawsuits. In the Moldex case, documents allege that 3M employees knew about the earplug defects as early as 2000.

The qui tam suit (United States ex rel. Moldex-Metric v. 3M Company, Case No. 3:16-cv-1533-MBS (D.S.C.) was settled in July 2018, with 3M agreeing to pay $9.1 million to resolve allegations that it knowingly sold its earplugs to the military without disclosing defects that decreased hearing protection.

“What was disclosed and what transpired during these prior litigations will be of great interest in the current matter,” noted Zonies.

“The primary defense currently being discussed by legal experts is government contractor immunity, based on Boyle v. United Technologies Corp., 1988,” she said. “This would require 3M to demonstrate that its earplugs met all three parts of an intensely factual test, generally proving that 1) the U.S. government approved reasonably precise specifications; 2) the equipment provided conformed to said specifications, and 3) the manufacturer gave adequate warning about any issues.

Speak with each veteran to understand the details of their military service and, importantly, the impact the hearing loss and/or tinnitus is having on their lives. As you move forward, ask your clients:

“One of the challenges plaintiffs’ attorneys will have is determining damages since the claimants in this litigation are so much younger than those in typical hearing loss cases. The lifetime impact of hearing loss and/or tinnitus is obviously much more significant for someone in their 30s than it is for the typical hearing loss plaintiff who may be in his 70s,” Zonies said.